Pakistan Youth outreach breaking barriers, reach out an extra mile on 14th August, the day when Pakistan came into existence on the world map, and a new step was taken introducing high altitude sports. Pakistan Youth Outreach successfully organized the high altitude football tournament and inaugural cricket match in collaboration with Shah-e-Shams sports club Shimshal. World’s highest grounds were decorated with Pakistani flags, from the high surrounding mountains to the entire playing field. The event was in the memory of Mr.Muhammad Khayal Baig. The semi-final matches were held at Mr. and Mrs M.Khayal Baig world’s highest sports arena Zarthgurben Shimshal, Hunza which is at 4100m (13451.44 ft), the first high altitude football and cricket ground in Pakistan. There were seven teams participated from Shimshal, and the teams who reached in the semi-final were Al-Shams Snow Leopards, Khizerabad Badshah, Center A team, Khizerabad B team. League matches were played in the Shimshal ground at 3100m and only semi-finals and final matches were played at Mr. and Mrs. M.Khayal Baig world’s highest sports arena Zarthgurben. 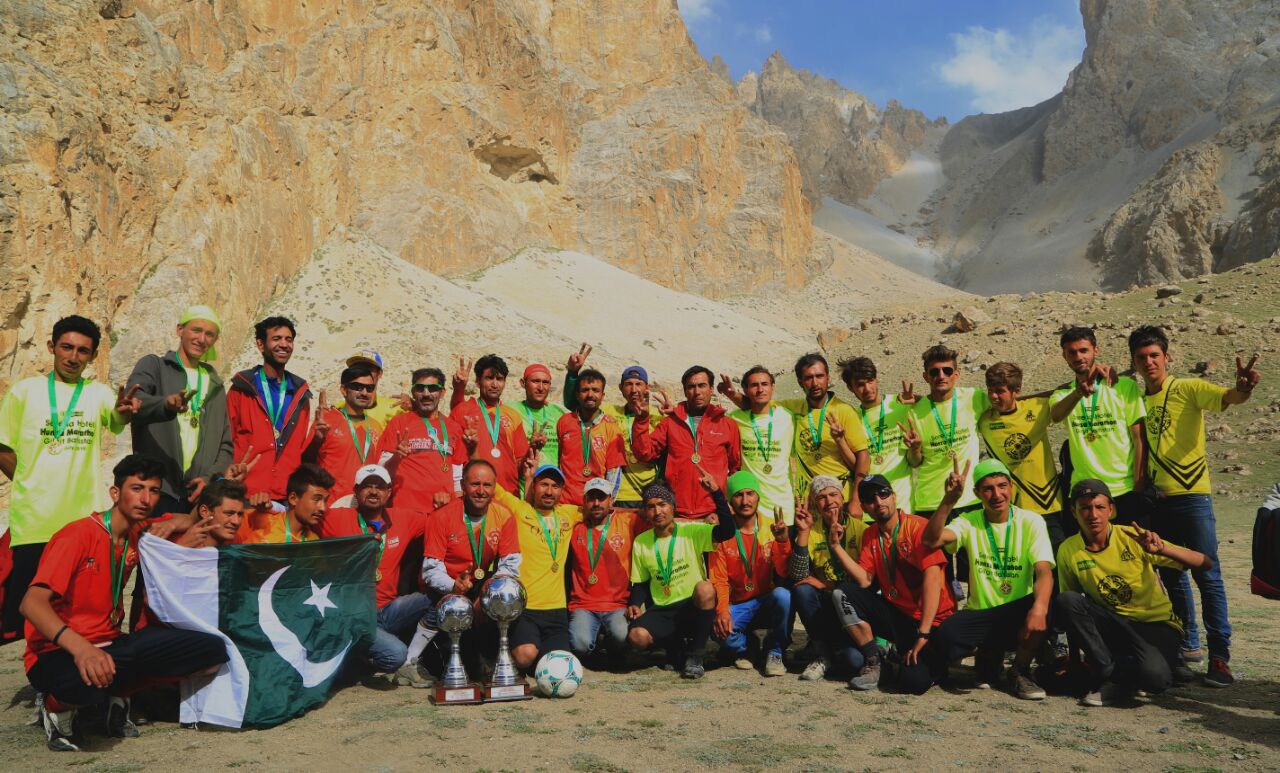 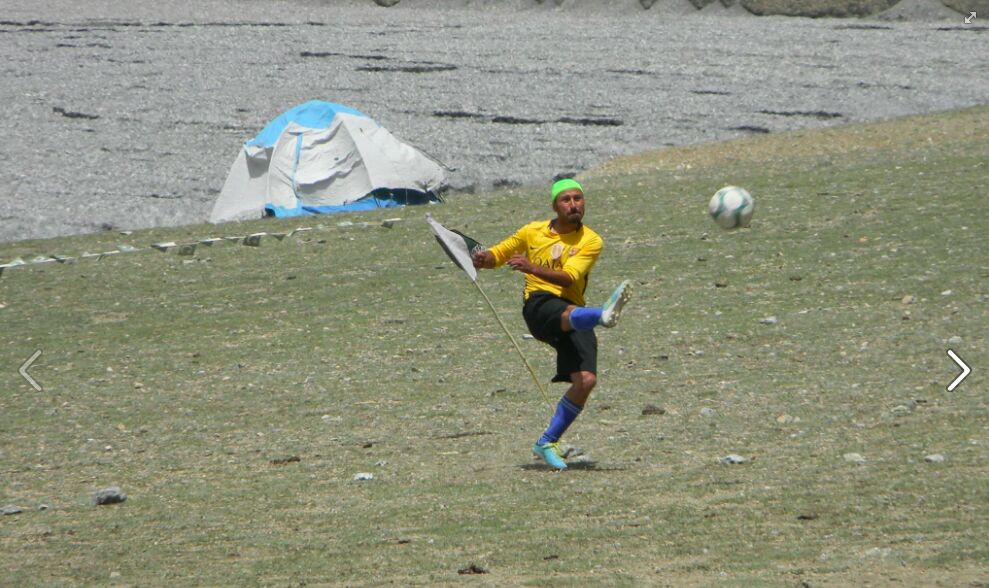 Zarthgurben is the perfect campsite to serve the outdoor sports requirements and our youngsters when searching out the best camp in Pakistan. Mirza Ali promises that this year will be bigger and better than previous years. The venue is 2.5 hours trek from Shimshal village a total gain of 1000m from the village, more than 250 people from the village of Shimshal, witnessed the high altitude football tournament. The boys and girls from schools cheered for the players, huffing and puffing struggling to beat each other, Al shams Snow leopards a young team won over Centre Shimshal team A by 2-1. A record number of entries have been received which has ensured that up to 98 local young players participated in the tournament. With a number of other tournaments also taking place locally over the same weekend it shows that there is still a huge desire and commitment from youth to facilitate, and participate in, friendly women football match of 30 minutes was also played within the same local area. Along the football tournament an inaugural cricket hardball match was also played between Itrab Shimshal and Council for Shimshal teams, Itrab team beat Shimshal council team by 12 runs and Naveed Akhtar secured first 50 at the world’s highest cricket ground. The elders, leaders of the village appreciate the initiatives and applauded for the players. The leaders, social workers and also village elders witnessed the final match. 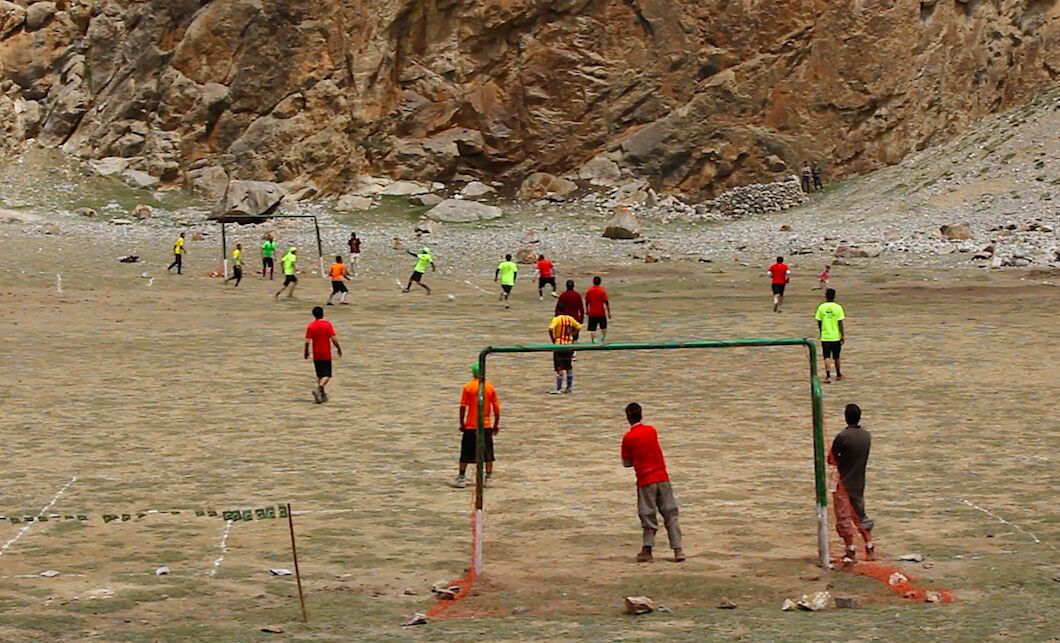 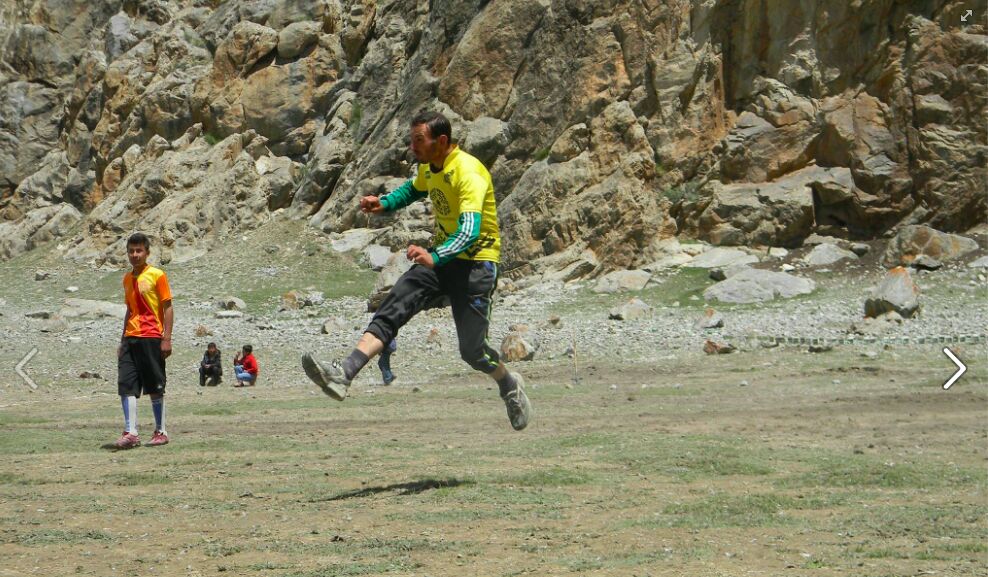 Wining Captain Kaleem Ullah said “This is unique and very interesting to play at world’s highest football ground, breathing inn and out hard fighting with altitude is indeed a job that you fight hard. But we train hard and won, this is indeed historical for me, my team and for the village to play at this ground on 14th August, the cheering crowd and the flags of Pakistan across the valley pumped us with great zeal. I believe this venue is creating opportunities and new direction for any athlete training at this height will certainly benefit to high altitude sports which will be advantage for any athletes competing at different international sports event”. 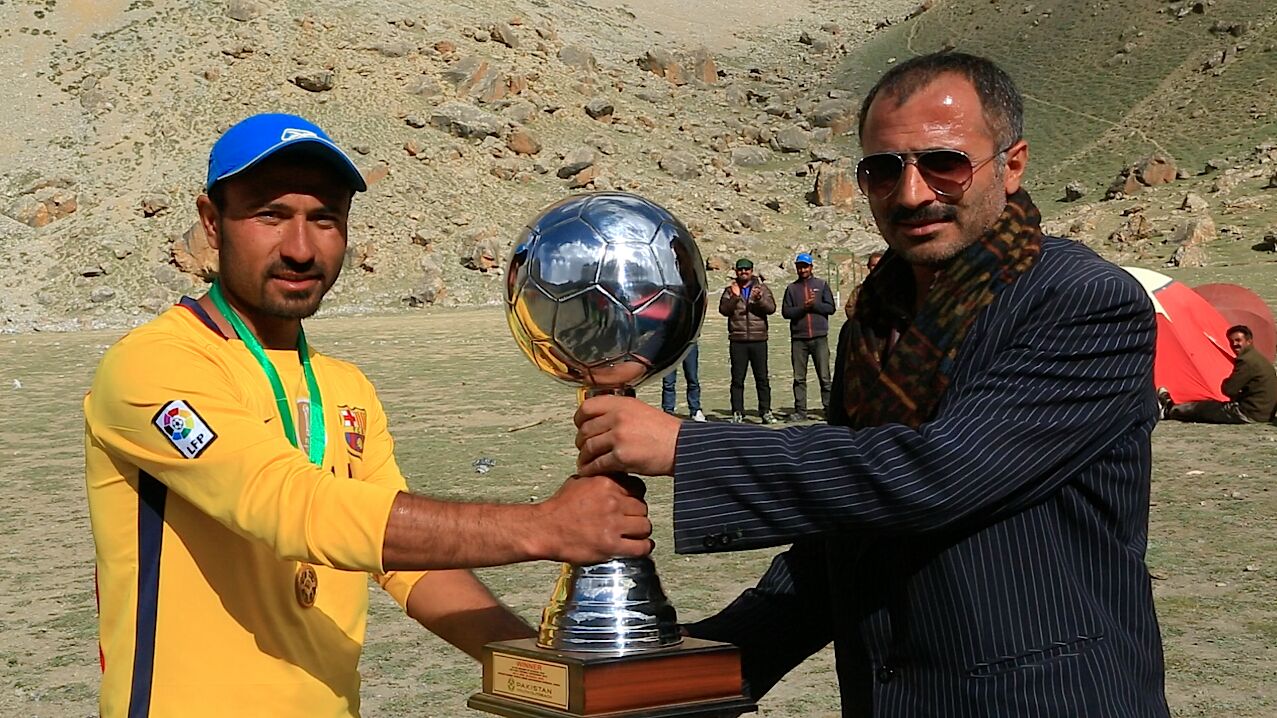 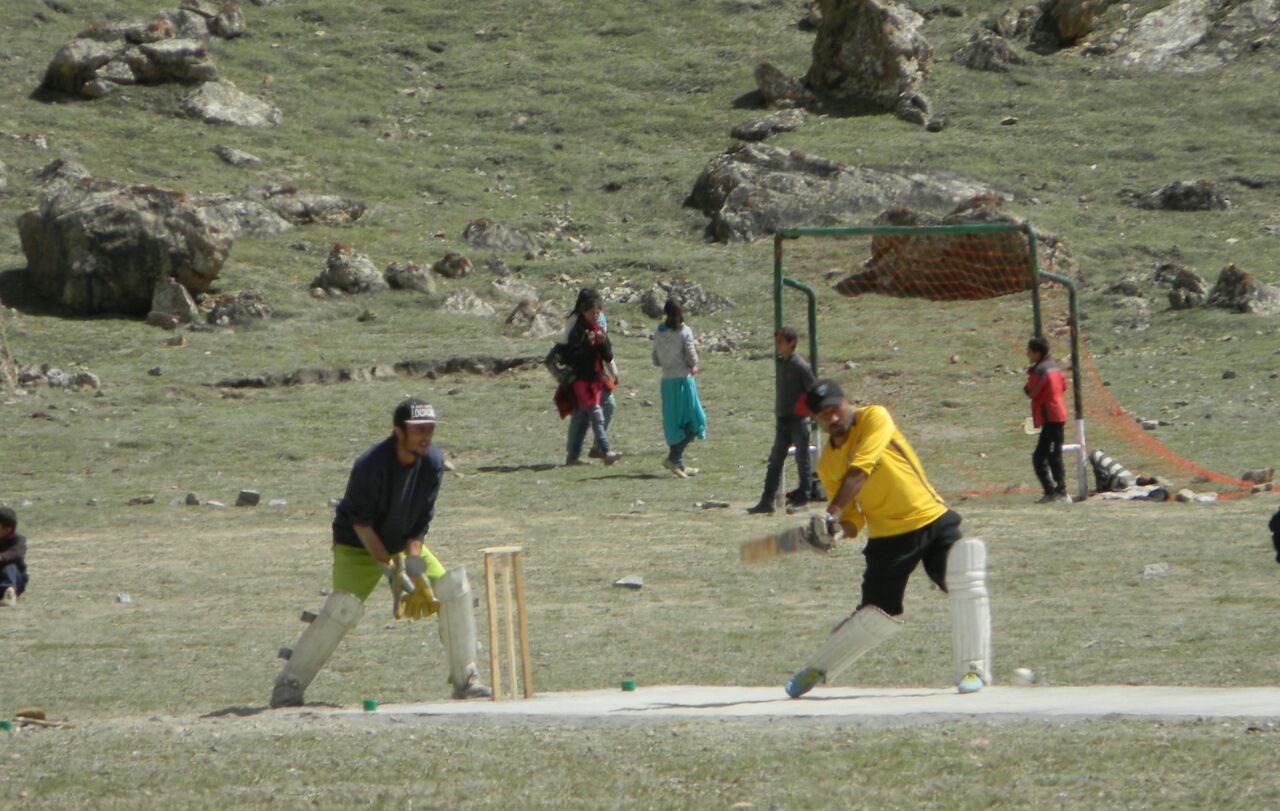 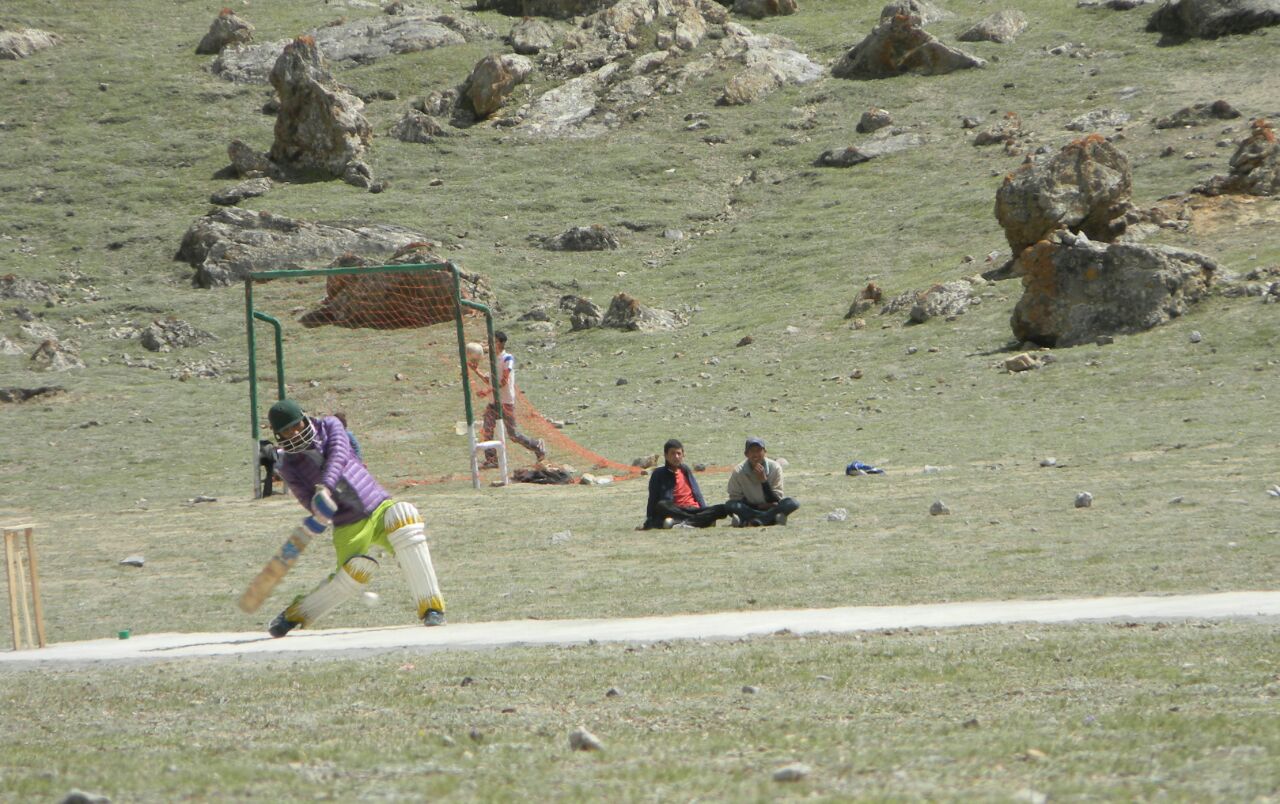 The experience of high altitude football tournament at the beautiful campsite goes far beyond enjoying the healthy activities connected with outdoors such as trekking and living in a resort fenced by massive rocky towers. The sports arena which has been named after famed duo mountaineer siblings parents, aim to develop the area for up to 22 different sports, from high altitude climbing sports, Skiing rock climbing, mountain biking, marathon, athletics, to volley ball, football, cricket and swimming, the venue is the only global high altitude sports arena. Earlier Zarthgurben has been Ski training resort for the past two years, the venue is constantly lead towards more development in the near future, chairlifts and other sports track will be developed to offer variety of sports all year round. Moreover, Zartgurben can be employed with the goal that campers ride to all the activities at the level grounds, youngsters can explore local nature sites such as for ice climbing, rock climbing, hiking , skiing, and ice skating. Pakistan Youth Outreach is taking it to the next level and engaging in a wide variety of outdoor sports.

Mirza Ali and Samina Baig, the founders of Pakistan Youth Outreach has envisioned and promoted the concept of character-building abilities, develop greater self-confidence, and team building and leadership skills through outdoor sports. The high altitude sports are a new inception in the modern sports and haunting talent for different international sports events, both Olympics and winter Olympics in the future.